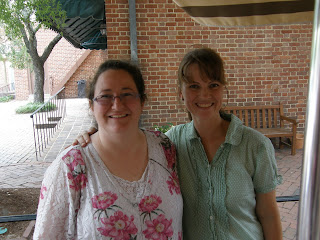 I had lunch with my TOS Homeschool Crew First Mate today. She is the one who presides over the mini-crew I am in. It is called The Good Stewardship. (You can click on the button in the sidebar to see the blogs of the other members.) She came into our area with her family (hubby and two kids) as well as two visiting Korean students to do the touristy thing for a few days. 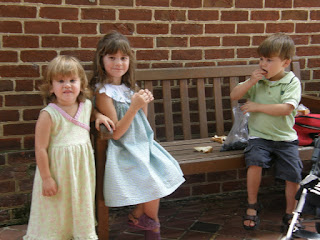 It was fun to greet them in our hometown and to put a face with a person I have previously only had e-mail contact with.

We lunched at a favorite local sandwich shoppe, then they went onto their next activity, while I took my kids to the candy shoppe next door and bought The Three Amigos giant smiley-faced lollipops as a treat. 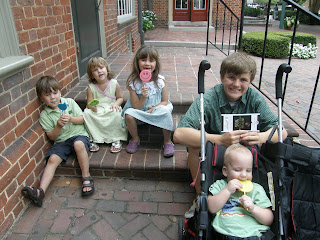 Poor Boo obviously felt left out, as he put up a fuss when he saw the others with their candy. He never fusses. I guess he was just communicating his confusion as to why such a big boy as he is did NOT get a lollipop, too. Well, being the nice mommy I am, I sent Tex back in to get him one of his own, and he REALLY enjoyed his first-ever lollipop. Awesome! 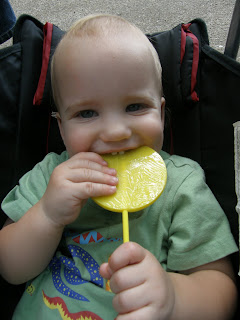 I then sent Tex in with a few dollars to pick out something of his own and he came out with a bar of gourmet Lindt dark chocolate. He was so excited, he could barely wait until we got everyone securely into the car so he could try it.

Imagine his astonishment when he bit into his first piece (and I into mine, since he generously shared his treat) and instead of a deligtful medley of flavors, we tasted...bark. Blah! Yuck! It was like eating, well, solid baking cocoa. Sort of a dirt flavor with the essence of something that might someday be mistaken as chocolate. Definitely not the Americanized dark chocolate we are used to.

I asked him to show me the label and discovered he had bought 99 percent pure dark chocolate. Oooops. That means less than one percent sugar. Oh my. What a let down...poor boy.

Ah, well. That was a lesson learned.

Now, what to do with the gourmet chocolate since it is so obviously no good for us to eat?

The solution he arrived at: Give it to dad. Hee hee.
Posted by Heather at 10:06 PM