The other day hubby was mowing and almost
ran over this interesting little guy. 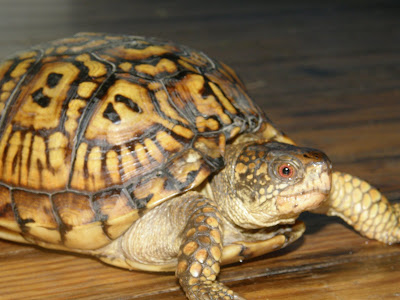 We﻿ took him home and looked him up on the internet
and discovered he is an Eastern Box Turtle
(that's what we figured, but we wanted to be sure.) 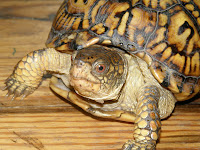 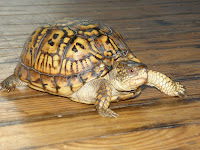 Here is the view of his underbelly, and one from above.
Isn't he pretty? Or should I say handsome? 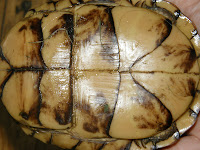 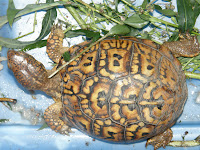 Here's what we found out about Box Turtles.
Scientific name: Terrapine carolina
They are the state reptile of North Carolina.
Eastern Box Turtles are one of only two types of box turtles
found in the US.
They range along the entire Eastern Coast of the US.
Box turtles live a long time, mature slowly, and have relatively
few offspring per year.
They live between 25-30 years old
(though some records indicate 50 year old turtles!)
and do not mature until age 7-10, when the females will lay
3-6 eggs in a shallow nest.
Over a lifetime a female will lay hundreds of eggs, but only about 3
of these offspring will make it to reproductive maturity.
You can tell a male from a female by looking at their shell shape.
Males have a flatter shell, while female's shells are more rounded.
Also, male's eyes are darker orange or red,
while female's eyes are brown or light orange.
We think we found a male turtle.
His eyes were very orangey-red,
and his shell was not very rounded. 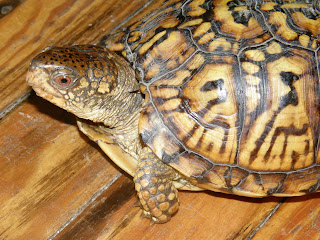 Eastern Box Turtles are special because they can completely
close their hinged shell as a defense against predators.
An Eastern Box Turtle also has four toes per hind foot.
Box Turtles vary greatly in coloring, shape, and pattern.
They are very brightly colored and reach a
maximum length of about 8 inches long.
They are omnivores, eating almost anything they come across,
from slugs, worms, and bugs to mushrooms, fruits, and vegetables.
They even sometimes eat carrion. (ugh!)
Box turtles live in a variety of habitats,
from wooded areas to grassy fields.
They may wander into water, but do not live in it.
They usually stay within 200 yards of their homes.
Box turtles hibernate in cold climates
by digging into loose soil and covering up.
Because they are slow to mature and so few of them survive,
as they lose habitat to construction, etc. and more die
due to encounters with vehicles and farm equipment,
their numbers dwindle more each year.
So if you come across a Box Turtle, be very kind to him.
He is an important part of the ecosystem.
Have fun looking at him for a while, but ALWAYS return him
to where you found them because
Box Turtles have a natural homing instinct
and will try to return to their hatching ground
no matter how far away it is. WOW!
We found this information on a great site about the Eastern Box Turtle.
If you want to read more, or see more pictures of these cute guys,
click on the link above.
Our turtle friend spent about a half and hour amusing
the children and being photographed,
then the kids took him outside FAR away
from the mower (but not too far from his home)
and set him free. 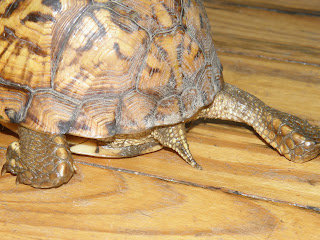 We are so glad he came to visit.
Bye-bye, Mr. Turtle!
Blessings,
Heather
To join Nature Study Tuesday, click on the button
on the left sidebar. It's a lot of fun!
Posted by Heather at 5:57 PM

What a great post with TONS of info. We found a similar looking turtle not to long ago. I think it was the same kind.

Thank you for sharing what you learned!

We found a one turtle this summer on the way to an appointment running late - bummer. Glad you enjoyed your study!
Monica

We discovered a turtle once, but since we identified it as a snapping turtle--and a very large one at that-- we observed him from the safety of the living room window.

Your children will remember this hands on nature study for quite some time, I'm sure. Thanks for sharing all you've learned. :)