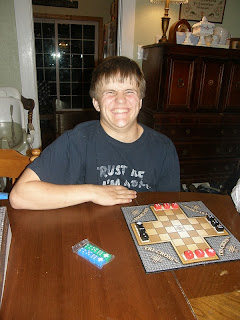 He asked me not to use this silly picture...
but it was too funny to pass up.
Sorry, Tex.
We gotta take the laughs when we can get 'em!
Intimidated by chess? Bored by checkers?
Like backgammon or dominoes?
Try Tricross, an innovative and interesting game
of strategy for ages 7 and up.
Designed to be played by 2-4 players, this game
can be played at varying levels of difficulty. 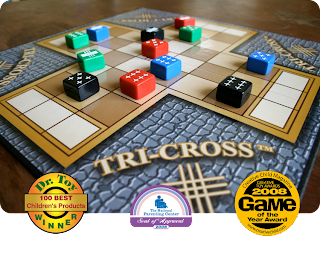 Brain-child of a father twenty-five years ago, redesigned by his sons and re-marketed recently, included in Dr. Toy's 2009 list of top 100 games, winner of Creative Child Magazine's Game of the year award in 2008, and awarded the National Parenting Center's seal of approval, this game has skyrocketed in popularity over the last few years. 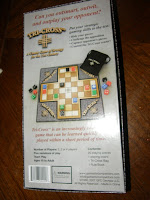 We received both the boxed board game version and the eco-friendly travel version to try out. This game was right up Tex's alley, as he has been attending meetings of the Chess Club at our local library for the past several months. He really enjoys strategy games and couldn't wait to get his friends to try it out. 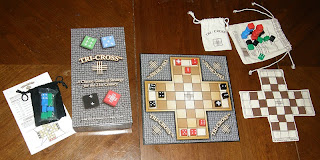 But first, we checked out all the components, and I have to tell you that both versions of the game were extremely well made. The boxed set is constructed from very sturdy cardboard...not the thin kind you are used to from ordinary board games. All of the pieces were very solid and beautifully made. The game comes with a bag to keep the pieces in, the board, the pieces, and the instructions. The eco-friendly travel version is a foldable playing surface made of sturdy canvas, has the same solid pieces, an instruction sheet, and two bags...one for the pieces, and one to hold the whole set. 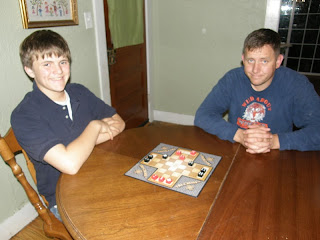 The first time Tex and Hubby played the game, I will be honest and tell you that they thought it was sort of dull. After all, the box itself states that it is very easy to learn, and they certainly felt that was true. The moves are not complex, like they are with chess, and the rules are easy to comprehend. 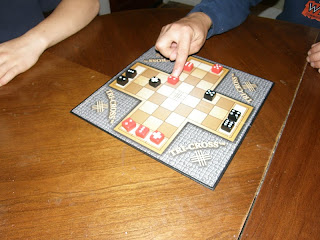 However, the second time they played, both of them realized that while their initial game had seemed too easy (compared to chess), once they really were familiar with the pattern of game play, the game became much more complex. They reported to me that their second and third games took two to three times longer to complete, and they had to strategize a lot more to win than they did the first time they played. In addition to the challenge that increases as your knowledge of the strategy increases, there are five levels of play explained in the directions. You can check out some "How to play" videos HERE. 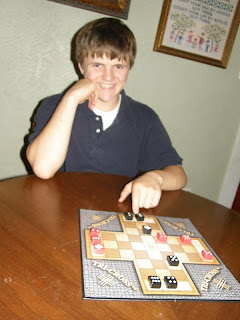 Tex says he thinks Tricross is a great game, and he is looking forward to introducing it to his Chess Club friends this week. He says that he thinks that it is (in difficulty) sort of in between checkers and chess...kind of like backgammon. If you enjoy playing strategy games of that type, you will definitely like this game. If you want your kids to learn a strategy game to boost their brain skills, but they aren't quite ready for chess, then this game will definitely work.


Some skills Tricross helps develop are: 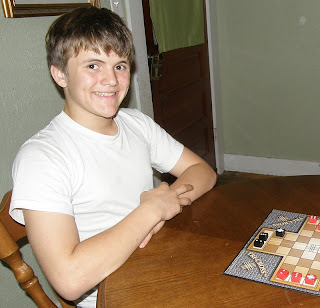 Both Tex and Hubby had very positive experiences with this game. In fact, they couldn't think of anything they didn't like about it. Tex figures he can teach Ladybug how to play it in the next month or so as part of her schoolwork on Fun Fridays. It will be a good start for her, since she has been asking about how to play chess recently.
If you have kids who like to take on a new challenge that develops over time, who need some hands on logical thinking skills workouts, or who just plain old love new games, give this one a try. My guys loved it.
Tricross offers information for educators HERE.
Watch several review videos about Tricross HERE.
Check out the "How to Play" videos HERE.
See what others from the Crew thought about this game HERE.
Prices start at $19.95 depending on the version of the game you want to purchase. If you are interested, you can buy a copy of the game HERE.
Blessings,
Heather
As a member of the TOS Review Crew, I received copies of the regular board version of Tricross, as well as the travel version of the game, for the purposes of reviewing the products here on my blog. What you read here is an honest review of our own experiences with the game. I cannot guarantee that your experiences will be the same as ours. If you have further questions, please feel free to contact me.
Posted by Heather at 11:03 PM