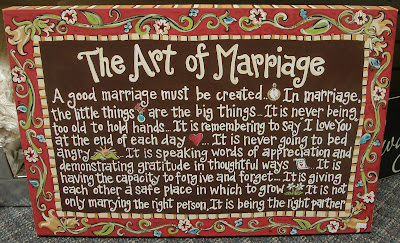 I saw this cute sign at the Tea Shoppe on Grande in Ames.
This Sermon Sunday is dedicated to my parents, who celebrated their 44th wedding anniversary on Friday. They are the best example of a successful marriage that I have ever seen. Through thick and thin, ups and downs, ins and outs, they have been an inseparable pair, filled with respect, caring, and devotion.

Best of all, they are truly still "twitterpated" with each other. A few years back, I made them a scrapbook for their anniversary called "The Smoochy Album." I'll let you guess what lots of the pictures were about...from their first married kiss to their fortieth anniversary kiss, the album's pages are filled with evidence of the affection that springs between them...not in a garish way, but in that sweet, heart-touching way that eveybody hopes they will still have with their true love when their youth fades. Thanks Mom and Dad for being such a great example of all that true love is.

We LOVE you, guys! Lots of smooches and hugs from all of us crazy folks who are missing you back at home (they are still in the Midwest visiting relatives...ain't retirement grand?)

Here's a short sermon from John McArthur about What Makes a Real Family Work . Hint: it isn't a big screen TV with 500 channels, fancy vacations, or unlimited texting on your Blackberry.

Here's a sermon series I like from Jeff Pollard on Marriage---Christ-Like Love. He's very conservative and his sermons are not brief, but they will REALLY make you think.
Part One
Part Two
Part Three

Dr. Erwin Lutzer's three part series on Building a Lasting Marriage (15 minutes each), which tells the story of his own parents' 76 year marriage. The "episodes" are short, but pack a powerful punch.
Part One
Part Two
Part Three

His next series called Those Vows Mean Something:
Part One
Part Two
Part Three
Part Four

You can go to this site and click on January 2010 if you'd like to get the links for the two follow-up series' (each three or four parts) titled The Goal is Holiness, Not Happiness and Miles Apart in the Same House.


I'll leave you with a favorite pair of pictures of my folks from last October and a new song from their favorite group, the Gaithers. (By the way, I have this CD waiting for you at home, folks, so don't buy it on the way home...Happy Anniversary!!) 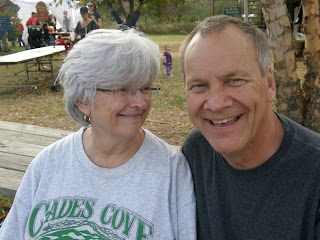 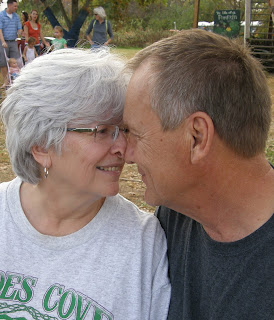 Now that's a love you can see...what a blessing.

Blessed to be your daughter, blessed by your wonderful marriage, blessed to have you here,

Heather
Posted by Heather at 12:39 AM