Years ago (many long years ago), when I was still a young girl, my uncle completed his college courses and headed off to seminary. I remember being flabbergasted by the turn of events because my uncle, whom we called Gooch (it's a long story), was one of the silliest, funniest, least-likely-to-go-to-seminary guys around. His room when he was growing up had fluorescent monster-head wallpaper and a huge overhead light that looked like a basketball going through a hoop. His favorite things (that I witnessed) were to play ball, goof off, and eat.

Then a few years ago, he once again felt that leading of the Lord to go back into ministry. It's a huge change to go from working with individuals to leading a whole body of believers, but he followed the calling and started working with a small congregation near his home. One daughter on her way to college and one dad starting a new career...it goes to show it is never too late to answer a calling.

This weekend, after a time of working with the congregation as their pastor, but not fully ordained in their branch, my uncle was fully ordained as a minister for this church (since he was already ordained in another church, he was qualified to be hired as pastor). It was nice to hear all of the sweet things the congregation had to say about him and how he has made such a difference for their church. It is obvious that he has helped many of them, and will continue to do so for I hope, a long time.

We were blessed to have my Grandma Pooh and Grandpa Bill visiting from Iowa for both the ordination and the wedding (which is in just two weeks...yikes!), and my other uncle, from San Diego flew out as well.

It just goes to show that if God has placed a calling on your life, the sooner you listen the better, because if you think you have staying power (translate that as "stubborn"), God has got you beat...He won't give up. He has great plans for you and the sooner you get started fulfilling them, the better!

The head of their church ordains my uncle.

The congregation prays for him.

My grandmother presents him with my great-grandfather's bible from the 1800s.

Greeting well-wishers...this is my other uncle. Tex and his cousin (my uncle's daughter) and me and grandma enjoying cake. 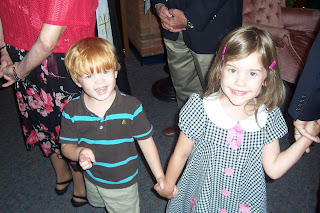 Firefly and Brother Bear, her cousin.

My brother and his boys, my mom and her mom with dad in the middle,

everyone enjoying the lovely feast provided by the sweet ladies of the church,
and my sister-in-law taking a rest with Little Bear.

Thanks to the lovely ladies for providing such a wonderful reception for my uncle and all of us.
What a blessing that God has brought you and my uncle together to do His work.