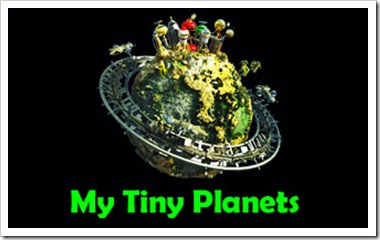 What is Tiny Planets?  It is an online community for ages 4-12 featuring two lovable characters named Bing and Bong. Bing is kind of a friendly abominable snowman-ish type guy and Bong is his faithful companion, a dog-like creature with six legs. They travel through outer space on a souped up plush hide-a-bed sofa with nifty controllers hidden in the armrests (I had a friend in college with a couch like this, only there were cup holders and an 8 track player hidden under there instead…this couch is much more awesome…does that factoid really date me, or what? lol!)

Parents create Cadet accounts for their children which allows the kids access to the Tiny Planets Universe. The children meet Bing and Bong as they traveling the universe and learn lessons from them about being kind, using manners, and how to handle emotions like fear. They also learn academic skills like making patterns, about weather and the seasons, and discover other scientific areas through activities, movies, and reading. There is a lot to do in this universe of Tiny Planets.

One of the first things your child will want to do is to set up his or her own planet for a homebase and get a space ship so they can travel. As you care for your planet, you can watch it grow, and earn awards as it develops. Basic (free) accounts allow for certain options in Tiny Planets. In order to access other options, you have to buy KEYS. These KEYS will not only allow access to more stuff for decorating your planet or outfitting your spacecraft, but they can also enable your child to unlock short movies and animated books .

What do you do on Tiny Planets?

What does Tiny Planets cost? The basic site is free. This includes the most essential elements, games, and activity pages. To access the over sixty short movies and the approximately twenty books, plus to add the “really cool stuff” (Ladybug’s words, not mine) to your planet and ship, you have to purchase KEYS. The cost is as follows: 10 keys $1.95, 25 keys $3.95, 85 keys $9.95, 250 keys $25.95, 600 keys $49.95. Movies and books cost about ten KEYS each. Once keys are used to purchase something, those items are yours to keep. The movie will stay active in your account for as long as your account remains open.

What we liked about Tiny Planets:

Some areas we thought could use improvement:

Who would Tiny Planets be good for?

I did not see anything offensive about this online community. We are not big on online gaming (ie. the kind that you have to pay for and/or the kind that allows players to communicate with each other), but this seemed to have effective safeguards in place.For someone who is into that sort of thing, this might be a good choice, especially for the younger members of the family.

If you would like to read other reviews about this product, go HERE.

Heather, thank you so much for taking the time to review our website. We take your opinions seriously, so you'll be pleased to know that we have lowered the age (4-8) and have added voiceovers as well as simplified the navigation and game play for the little ones.

The "pen" is truly a mighty instrument! Oh, and please thank Tex for his sacrifices that made your review possible. :-)

Hi. Just wanted to thank you again for reviewing the site. I wanted to let you know that on April 4th the new and improved site was launched. I'd love to hear any thoughts you might have, especially since some of the changes were made because of the Crew's suggestions. You can check us out at www.tinyplanets.com. You can reach me at cheryl@mytinyplanets.com.